Ivan Rakitic has revealed what he told Lionel Messi during Barcelona's Copa Del Rey triumph over Sevilla at Camp Nou earlier this week.

The 32-year-old midfielder said he told the six-time Ballon d'Or winner that he has a trophy he will never win.

Both players got a chance to chat during the game which ended 3-0 in favour of the Catalans - a victory that propels them into the final of the championship. 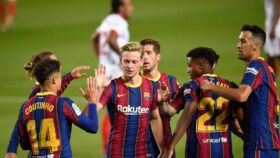 After dumping Sevilla out of Copa Del Rey, Barcelona send crucial message to them on social media

And the midfielder who spent six seasons with the Blaugrana winning 13 titles had the chance to chat with former teammates during the meeting.

Rakitic was among the senior players who exited Camp Nou due to the financial crisis caused by the deadly coronavirus last year. Rakitic told La Liga TV and was reported by Goal .

"I was speaking to Messi and said, 'You have won it all, have scored all these goals, but I told him, I have won a trophy you'll never have. You'll never win the Europa League!"

Rakitic who won the Champions League with Messi and others in 2015 insisted that Barcelona players earned all the respect they have, adding they were not given anything.

"Those guys weren't given anything. They earned their success. It's no coincidence those guys have won it all.

"Every player had a part to play. Each of them did things their own way, but it's always to win. We said in Berlin ahead of the Champions League final, 'With everyone together, no one will beat us.'''

Rakitic scored against Barca last month in the first leg of the teams' Copa del Rey semi-final, which the Andalusian side won 2-0 but was unable to inspire his side to victory over the Catalans.

A goal each from Martin Braithwaite, Gerard Pique, and Ousmane Dembele gave the Catalans the victory as an edge towards winning their first title this season.

Ronald Koeman's men will now face either Levante or Athletic Bilbao for a chance to lift the silverware on Sunday, April 4.